3D Art Generalist who enjoys all things Creative and Technical

Okay, its been a while but I’ve been working on the above for some time now.  I’m really excited to finish it.  It’s getting closer to completion.  Hopefully it will be finished by the end of February.  It’s part of my monthly goal. This month is to finish a prototype (I did a non-game and a game << more on that later) and an Animation.  I am still working on the animation and will be finishing/posting that up soon.  Next month is 3D Sculpting!

So the other day I went to see BIG HERO SIX with my cousin.  I love watching Animations; whether its 2D, 3D, stop motion, and… really anything animated.  I was so excited to see this and I must say I was not disappointed.  The story, the action, the characters, and the visuals we’re fantastic. The only thing I was a little iffy with was the performance capture.  I’m not a huge fan of it, I like to see animators bring the characters to life its thrilling to see their interpretation of how the character would act.  I mean animators are just like Actors without seeing them or hearing them.  Anyway, it was better to use performance capture because of all the action.  It’s a Marvel comic on the big screen so there is bound to be some really good fight sequences. And the sequences were eye candy. I love fight sequences, animated or otherwise.

I say go see the film, its worth the money and you won’t get bored.

So this post is a bit late but this past weekend I went to a Unity event to learn more about the software and about the new features coming out in Unity 5.x.  I’m most excited about the Runtime GI and HDR. The new GUI system is apart of 4.6 but I’m so happy they have something to make an Interface easier. Anyway, at the event everyone there had a chance to win a free Unity Pro license.  If you haven’t guessed already from the title I won :D. I received the license about a day or so ago and am playing around with it. It’s great that I got the license because I was thinking about getting one but didn’t know how I would pay for it. This perfect for me!

What also is cool is I’m on the beta team for Unity 5.  That’s all I’m going to say on that.

It’s Unity, Unity, and more Unity for the rest of the year and probably beyond.  I’m working on a project for work so I’m probably going to know the ins and outs of the software by years end.  Here’s hoping!

So I currently work as a 3D Generalist at a recreational company.  I model, texture, some times light and composite.  Recently, I have been working in Unity to create an application for the dealers/sellers.  Its a relatively large task, which would require me to focus on color changes, part assembly, moving around the space, submit a quote, email customer service, touch screen capabilities, print content, connection to the web (it might be cheaper/smaller to make it a desktop application then a web one), switch through the catalogue, input custom playgrounds, and more.  I already created a prototype for another product line but this application is going to be heavier and more demanding.  It’s a big task that would need to be created by the end of the year but I’ve never been afraid of a challenge.  I’ve been reading and watching as much as I can on Unity, C#, Python, C++, and shader creation.  It’s going to be a lot but I’m more then ready for it.

Yesterday, I say the Doctor Who Premiere in Theaters along with Behind-the-Scenes and a short Prequel. The prequel featured the Paternoster Gang, Madame Vastra and Jenny were trying to prevent a ship from crashing into London and Strax was updating his blog.  He was explaining the regeneration (“degeneration” as he put it) of the doctor.  I was hoping to see what was going on in the TARDIS but the prequel was still good.

I missed a few things while watching the episode the first time.  There was some whispering of questions and loud laughter but for the most part it was a lot easier to watch the show in comparison to viewing it at a bar.  This episode has gotten me feeling that there are a lot of dark things a head for the Doctor and Clara.  I’m not sure how I feel about the doctor but if the next episode is an indication then I think I’m really going to love this series! 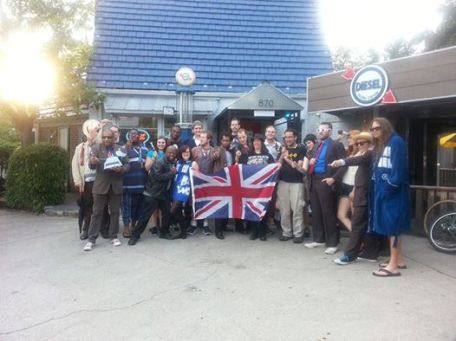 Yesterday I went to the DIESEL FILLING STATION to watch the premiere of Dr.Who.  I started watching the show when Matt Smith was Doctor.  I fall in love with the idea that all the Doctors personalities are fragments of the DOCTOR.  I am trying to watch all the episodes starting with the original.  I got past a few episodes (I’m at the Mayans) but am taking a break to get some real work done done.

The episode was pretty good.  I’m not sure how I feel about the new Doctor but as the 11th/12th Doctor said “Give him a chance” so I will do just that.

This past weekend I went to MomoCon.  My first since I moved here to Atlanta (more in another post).  It’s a little different then I’m use to.  It took me about an hour to park and an hour to get registered.  By the time I was in, I missed two panels I wanted to see.  I honestly didn’t think it would be so big and in a hotel until I was at the place.  There were only about two registrars, one for cash and the other for credit.  I thought that could done better.  The cosplayers were plenty but not many were professionals.  Some of them looked like they bought their costumes online.  I’m not dissing it, it’s just an observation.  I love cosplayers of all kinds.  What I hate (I found out while experiencing MomoCon) is when I ask for a picture and they don’t pose.  It turns out it’s a pet peeve of mine.  I asked two Inuyashas for photos and they either sat or stood there with a blank look on their face.  It was very disappointing for me, I deleted the photos right after.  It was bring the experience down 😦

The guests were pretty good, a nice variety.  I missed some panels because of registration but I missed others because I planned my day badly.  There were about 2 or 3 voice actors from Futurama (my favorite show) doing a script reading of “The Matrix”, I missed that.  What a shame!  The panels I did go to were not that great.  Either people showing a video, ranting about something, or just taking questions (though that’s not that bad). I spent a lot more than I wanted to and waited a lot more than I wanted to.  It felt over-crowded at times for such a small venue with many different levels.   My overall experience was okay but I doubt I would go back next year.  They were more negatives than positives at this convention.  ComicCon is next week but I don’t know if I should go.  I know it will be great but I might just wait till next year… we’ll see!

Can’t remember…Anyone know this one?